Jenny Ellis has been a puppeteer for over fifteen years. She has a Post-Graduate Diploma in Puppetry from the Victorian College of the Arts. In 2012 she was awarded a major fellowship with the Mike Walsh Foundation to research contemporary puppetry in Europe.

Jenny was a Researcher for the NSW Minister for Education from 2003-2005, and has a Bachelor’s degree with a major in Environmental Education. As Artistic Director of Company Gongoma, their show The Mermaid’s Daughter won the Melbourne Fringe Festival Award for The Best School Holiday Program 2008.

Jenny’s performances have been enjoyed by over 40,000 kindergarten and primary school students in every state and territory of Australia. Her shows were written in collaboration with acclaimed authors, musicians, and directors; she has been mentored by Richard Bradshaw (OAM).

Jenny has also directed two workshop series at City of Melbourne’s ArtPlay; Shadowy Figures: Playing with Light (2008) and Stand Up Puppets: Getting the Giggles (2010) where the children created puppetry short films, which were shown on the big screen for Puppets @ Fed Square.

A young owl has been sent to study with an older master, Mr. Tawny. He is angry and misses his family. He’s impatient, he throws tantrums, he sulks. He just wants to go home. He knows the only way he can go home is by gaining “wisdom” but he doesn’t even know what it is.

On his way, he finds that wisdom isn’t just knowledge. It is knowledge learned from experience. Not just being guided by the lessons of the past, but being able to adapt to new situations. How can these things be wisdom? Isn’t wisdom just one thing? He is very confused. Mr. Tawny sets for him a test in which he must use all the wisdom he has gained from the animals to guide him. Will he get through?

The Owl’s Apprentice is an interactive solo show created by Jenny Ellis using a combination of shadow puppetry, hand puppetry and story-telling. The show is about our unique Australian animals as well as drawing on the field of applied ethics and the 16 Habits of Mind developed by Professor Art Costa. The Owl’s Apprentice poses questions to extend young minds.

“We had the amazing Jenny Ellis out at our school yesterday. As a Visible Learning School, her performance was outstanding and exactly what we wanted. The students were engaged, the storyline was amazing and her puppets and shadow puppets are beautiful. Not only that, Jenny is so easy to work with.  Best I have seen for a long time.”
Shane Crawford, St Bernard

A Little Bit of Blue

A Little Bit of Blue is an interactive environmental detective story told with puppetry. As well as helping to unravel a mystery, students will learn about the extraordinary habits of the Australian Satin Bowerbird, and why they are so fascinated by the colour blue.

The story begins with strange disappearances from Mrs Mavis Hooley’s home. Little things: clothes pegs; a tea cup; a ball of wool go missing. But then the thief takes it just one step too far.

Mavis calls in a Detective to investigate. A stake out is required.

In the dead of night, the Detective indeed finds something peculiar… The children’s role is to help him solve the case.

Spike is the story of an echidna, stolen from his nest by a greedy rat.  He hatches from his egg far away from home. A young girl finds him. She is playing alone in the bush because she is being bullied by other children.

He has no spikes yet and she doesn’t know what kind of animal he is. She tries to work out where he comes from, but accidentally puts him in dangerous situations – in the nest of a crocodile, an emu and a turtle. He feels frightened, rejected, alone. As the story unfolds, she helps him to discover where he belongs, and he helps her to find her own “spikes” and stand up to the bullies.

Told with shadow and hand puppetry, Spike is an interactive experience for the audience. It is entertaining and fun, as well as a catalyst for a discussion about difference and belonging. It also has an environmental theme, being about the unique biology of Australian animals, especially the egg-laying echidna.

After the performance there is a demonstration of shadow puppetry techniques, introducing children to an expressive hands-on story-telling medium that is highly accessible to young people.

Spike was written in collaboration with acclaimed author Anne Brooksbank, whose work was shortlisted for the Prime Minister’s Literary Award for Children’s Books 2012, & created under the mentorship of Richard Bradshaw (OAM).

Watch as their drawings leap to life, off the page and onto the stage!

The aim of this workshop is to explore the artform of shadow puppetry. It will introduce children to an expressive hands-on story-telling medium that is highly accessible to young people. In this workshop students are led through the process of imagining and designing their own unique puppet characters. Then they are guided through the steps of realizing their designs, cutting and crafting their own individual puppets. After that, students work together in small groups to write their own shows. With an experienced shadow puppeteer to a reveal a few tricks of the trade, they then have the opportunity to perform their shows to the group on a portable shadow puppet screen.

“It was good to see the Robot cry. Sometimes I cry too. It was good when the Robot got sad and then got happy again. It makes me feel like when I get sad, I can get happy again too.” – Charlie, 4 years old, Seymour, VIC.

The story is of an inventor, Dr Doovalacky, who, with the help of his assistant, a green caterpillar named Mr Wigglyjig, sets out to build a robot with the ability to have feelings like a “real” human. The audience helps him to learn about the world, but quickly it becomes more complicated. Dr Doovalacky finds himself losing control of his own creation.

Trinket learns that to become human is to not only feel wonder and joy, but also to feel other emotions like anger, fear and the sadness of saying goodbye to someone when you are not ready to. Having feelings is not easy and to be alive means making difficult choices.

Trinket the Robot is an interactive solo puppet show, based on the tale of Pinocchio, which explores emotions and offers strategies to children to help understand different feelings. 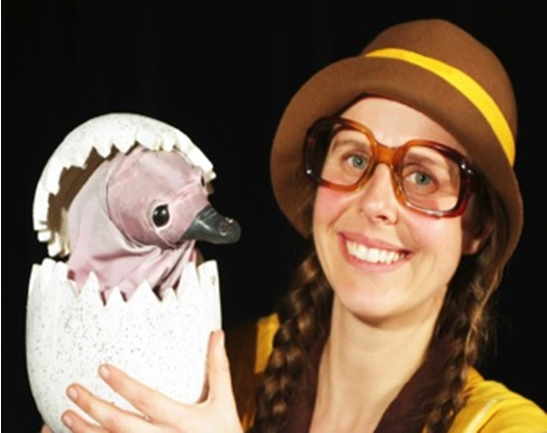